Edit
watch 01:36
We're Getting Mutants in the MCU - The Loop
Do you like this video?
Play Sound

Kusanagi Mizuho (草凪 みずほ, Kusanagi Mizuho?) is a Japanese mangaka and the author of Akatsuki no Yona. She was born on February 3[1] in Kumatou, Kumamoto Prefecture, Japan. She went on hiatus for several months due to the 5.1 Kunamo earthquake on Aug. 31, 2016. She has since returned to a regular production schedule.

Aside from her official works, she has released several doujins, with the majority being of yaoi genre.

Kusanagi as a meerkat 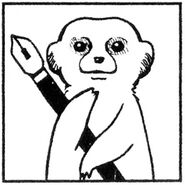 Kusanagi as a meerkat