Akatsuki No Yona Wiki
Register
Don't have an account?
Sign In
Advertisement
in: Article stubs, Characters, Male,
and 3 more
English

Edit
watch 01:36
We're Getting Mutants in the MCU - The Loop
Do you like this video?
Play Sound

General of the Sky Tribe

Han Joo-Doh (ハン・ジュド, Han Judo?) is the General of the Sky Tribe. Even though he is the general, he is not the ruler of his territory as the Sky Tribe currently holds the royal authority, which automatically makes Soo-Won as the leader.

Joo-Doh is a tall man who has brown eyes and a scowl painted on his face. He has a messy, short black hair with fringes that is parted on half. On his right cheek, there is a medium-size scar etched on it.

He dons a long sleeved black tunic underneath a blue armor that has shoulder pads extending past his shoulders. Atop these pads is where he fastens his blue cape that has a dragon pin that serves as a button.[3] He also equips a pair of gauntlets on both ends of his tunic’s sleeves and a pair of blue boots as his footwear.

Joo-Doh is serious, strict and self-disciplined, which makes him prone to anger if somebody disobeys the rules. Even if he has a short temper, he has a great perception on things and can see how one is feeling through his actions.[4] Also, when it comes to training, he is persevering and will confront his training partner or enemies without fear.

At the age of 24, he is already the Captain of the Imperial Guard’s first squad, as well as a junior of Lee Geun-Tae, who was already a General at that time. Eventually, he is promoted to the position of the Sky Tribe General.[5]

After the incident of Emperor Il’s death, he attends the five tribe meeting together with Soo-Won and Kye-Sook.

Joo-Doh accompanies Soo-Won to Awa Port to gather information about the ongoing trafficking in the port town. In an early day during their reconnaissance, he finds Soo-Won together with a woman he hides underneath his cape. He soon leaves the two of them after he reports about Yang Kum-Ji’s disappearance that was probably caused by the pirates. They decide to wait for the king in the hills near the town and assume that he will return in nightfall, but to his surprise, he sees Soo-Won back as soon as he expected. Despite that, he tells him that there shouldn’t be any time for him to fool around, to which Soo-Won agrees to and thus, they head to Chi'Shin to visit Geun-Tae. 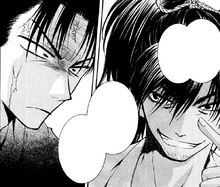 Upon arriving at Chi’Shin castle, Geun-Tae serves them tea as per the request of Soo-Won. Geun-Tae tells them that it is made by his wife and Soo-Won likes the drink very much. Joo-Doh, on the other hand, criticizes the hospitality Geun-Tae shows as he believes that he shouldn’t have served tea his wife failed to make.[6] Instantly, the two of them get into a fight and Geun-Tae retaliates how his uptightness is the reason why he still remains single. Soo-Won immediately stops them, but Joo-Doh turns his rage towards him and scolds him for being absent-minded.

When they finish resting, they stroll around the castle; however, their supposed peaceful trip turns into a stressful one as Geun-Tae declares his desire to rebel against Soo-Won. Joo-Doh and Geun-Tae’s servant, Chul-Rang, tries to stop him, but both of them fail to do so. In the end, Geun-Tae leaves them and Chul-Rang apologizes in his stead as he tells them that he wants to fight again. Soo-Won then plans to conduct a game festival and in a matter of short time, an excited Geun-Tae shows up on them. However, when he learns that only a mock battle will take place, he becomes mad and tries to attack Soo-Won. Joo-Doh gets in between them, though he feels the same like the Earth Tribe General and once more, he turns to the naïve king and scolds him for having an unnecessary leisure time.

After a week, he participates in the game as a member of Soo-Won’s team. Shortly before the match starts, Geun-Tae tells him how he can’t imagine Soo-Won as strong and compares him to his childhood friend, Hak. He doesn’t agree with him and he tells him flat out how he and his people are so blind to the true nature of the king.[7] The game finally begins and after a while, he meets up Geun-Tae and defends himself against him. During their duel, he protects himself against one opponent, and shortly after, points it once again at Geun-Tae. The Earth Tribe General praises his swordsmanship; however, he doesn’t appreciate the compliment and calls him a simpleton as he is unaware of his surroundings. Just as he noted, Soo-Won already fooled their opponents and Geun-Tae rushes to stop him. Eventually, the game ends with Geun-Tae winning the game with a small lead.

The following day, they have tea once more and Soo-Won compares Geun-Tae to him, to which he greatly dislikes. Moments later, Yun-Ho and an old man show up to tell how their businesses have an unexpected inflate of demands, and Soo-Won uses this opportunity for them to leave inconspicuously. On their way home, he asks how much Soo-Won calculated his plan to help the Earth Tribe and wonders why its citizens love Geun-Tae so much despite being ill-mannered.

Expecting the arrival of Kan Soo-Jin and Li Hazara, he waits in the front line of their army together with Soo-Won. When the enemies finally arrive, he vows to the king that he will protect him, only to be cut off and ignored which makes him angry. Soon after, he leads his men while riding horses disguise in tiger pelts in order to deceive the opponents. At first, they are losing as they are outnumbered, but they gain the upper hand when Geun-Tae and his army show up as a backup in the last moment. Drowning in despair, Soo-Jin attempts to kill Soo-Won with a bow and arrow in his hands. Joo-Doh uses himself as a shield to Soo-Won while Geun-Tae runs to Soo-Jin to stop him. In the end, the Fire Tribe General is killed off by his own soldier.

After the war, they meet Soo-Jin’s son, Kan Kyo-Ga, who is begging to be punished for the traitorous act of his father. However, Soo-Won appoints him as the next Fire Tribe General and afterwards, they go to where his younger brother, Kan Tae-Jun, is. In a Fire Tribe village, Joo-Doh sees how unusual Tae-Jun is and even thinks that they got into the wrong place.[8] But as Kyo-Ga himself identifies his brother, his doubt vanishes, though he becomes curious as to how Kyo-Ga distinguishes Tae-Jun. Kyo-Ga notifies his younger brother about the betrayal of their father, and during their talk, Joo-Doh informs them both that they will not be punished as they have knowledge of the affair and they should thank the king for his leniency.

Following their visit to the brothers, they move on to the borders of the Sen Province to meet Li Hazara. The two heads discuss about the damage expenses and subsequently, the payment for it and the future relationship of their territories. The conversation ends with an agreement on both sides, though it mostly happened because of Soo-Won’s threat to Hazara. They soon return to Kouka, and along the way, Geun-Tae contemplates about Soo-Jin’s fate and Joo-Doh tells him that this is the more reason why they must unite as to prevent the same thing from happening again.[9]

Dual Swords: Joo-Doh can wield swords on both of his hands with great efficiency.

Ever since Soo-Won was a kid, he has been keeping an eye on him and mostly became his guardian even after Yu-Hon’s death. As crucial as he is, he doesn’t let Soo-Won to go to places easily like he usually does and always reminds him that he shouldn’t be playing around as he is now the king.[10][11] Despite all of his nagging, he remains loyal towards him, even after he overthrew Emperor Il from his position.

Among all the generals, Geun-Tae is the one Joo-Doh is closest to even if their interactions show otherwise. The two of them rarely agree with one another, and for most of the time they are bickering at one another, though he is mostly the one who gets defeated in the end. Even when he was still a captain, he never had a good relationship with Geun-Tae and he shows his irritation towards him behind respectful language harmonized with a sarcastic tone.[2] However, when it comes to fighting, they are able to work together without fail. He also seems to be upset about the fact that Geun-Tae's wife is so much younger than him.

Like Soo-Won, he has always looked out for Yona when she was still young. However, as he sided with Soo-Won with the political rift that happened, he ultimately betrays her. Despite that, he wished for her safety and prayed that she has not gotten involved in such matter.[12]

Long before Soo-Won's ascension to the throne, Joo-Doh has always harboured a deep hatred and resentment towards Hak. He was angered that he was passed over in favour of Hak to serve as Princess Yona's bodyguard and humiliated at a martial arts tournament when Hak skipped their match shortly after he was appointed General of the Wind Tribe. Joo-Doh overheard spectators commenting how he narrowly avoided fighting him, believing Hak would have surely defeated him. Before the match, Joo-Doh briefly met with Hak and Soo-Won and gave off an intense stare towards him before leaving, showing his deep rooted hatred. Due to his hatred for Hak and seeing Emperor Il showing favouritism towards the young warrior, Joo-Doh abandoned his loyalty to the crown and began to follow Soo-Woon. When Soo-Won was made king, Joo-Doh began to more openly show his hatred towards Hak, seeing him as a danger, knowing he wishes for Soo-Won's death. During Hak and Soo-Won’s first encounter since their duel at the castle, Joo-Doh attempted to stop Hak from approaching Soo-Won, but was swiftly defeated by him. In a later encounter after saving Lilli, Joo-Doh wanted to kill Hak despite his assistance in rescuing Lilli, but was stopped by Soo-Won, advising him against it, seeing the Dragon Warriors and Wind Tribe ready to protect Hak at all costs.